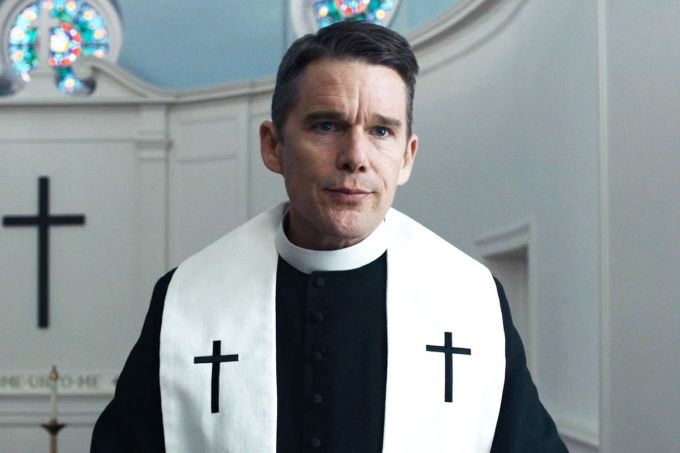 Every now and then a film come along that gets your mind ticking.  First Reformed is one of those films.  It’s full of meaningful ideas that are presented in a beautifully nuanced fashion, it has purposeful characters that you care about, and most of all it captures your absolute attention.  And it’s fascinating outside the film as well, because writer & director Paul Schrader by all accounts hasn’t made a decent movie in years.  He is probably still best known for penning four Martin Scorsese scripts, notably Taxi Driver (1976) and Raging Bull (1980), but since then it’s been a patchy road.  I have only seen one of his directorial efforts other than First Reformed and that’s American Gigolo (1980), so forgive me if I’ve missed a gem of his.  What I do know is that his recent efforts have tanked financially and have been slated by the critics, so where has this sudden greatness come from?  At 71 years old?

The film follows Protestant minister Ernst Toller, played wonderfully by Ethan Hawke, who is the pastor of small historic church called the First Reformed.  He is questioning his faith and morality, and in attempt to feel the urge to pray again he begins writing unapologetically about himself in a journal.  In his words he writes of his failings, his worries and his ongoing dark thoughts about his past and upcoming present.  His past being a life of military and loss, and his present being an illness that is debilitating him physically.  Not only is he urinating blood, but he also has a problematic member of his church to deal with.  Angelic churchgoer Mary (Amanda Seyfried) pleads Ernst to come and talk to her husband Michael – a man haunted by the consequences of climate change.  Speaking to him, and the events that follow, bring the reverend’s life to boil, and suddenly his purpose is much clearer.

Before getting too deep into thematic issues, let me say that the plot in this film is perfectly executed.  Schrader draws out a troubled clergyman, and pairs him with a societal issue.  This being the human damage of the environment, and the impending doom of global warming.  At first this plot development is almost a distraction to the main body of the film, but eventually it becomes a representation of Ernst lack of faith.  He is losing faith in himself and consequently his God, and then when he is opened to the issues of climate change, he loses faith in humanity too.  Michael is a radical environmentalist, and on initial meeting Ernst enjoys debating him on not losing hope on the world, and on trusting your religion to guide you.  The thrill of the theological discourse excites Ernst, somewhat throwing him back into the perils of a military career.  It also hangs upon how deeply interesting it is to match religious rhetoric with real life problems.  The world is dying?  Perhaps God is punishing us.  Activists are being shot for the cause?  Perhaps God has an ultimate plan for them.

Personally, I’m not a member of any kind of organised religion, but I do think that religion could be the most interesting topic in fiction that there is.  Whether that’s a disturbed story about a system of sexual abuse in the catholic church (Spotlight, 2015) or as hammy as the search for the mythical holy grail (take your pick on that one, I’d go with Indiana Jones and the Last Crusade, 1989).  It’s the obsession with a higher power and the subsequent creation of rules to follow it that makes religious stories so impactful.  There’s a mysticism to it, and a sense of intrigue to the darkness that comes from the wonder of God.  Churches are spooky and being stood in one you can’t help but feel something.  Schrader isn’t shy of stories revolving around religion, he wrote Martin Scorsese’s The Last Temptation of Christ (1989), which is effectively a sexualization of Jesus’ last day on Earth, and he also directed Dominion: Prequel to the Exorcist (2005), which is a much-hated spin-off.  With First Reformed he has developed a more complete, and acute religious piece of art, like Scorsese’s own Silence (2016) – a glorious film despite Andrew Garfield’s off-putting Portuguese accent.  An answer as to why he’s finally found the right formula could be because as a man in his seventies, he’s closer to death and so is closer to God.  If you disregard the form, and the moving parts of the film, you can see a filmmaker that can still surprise you.  And this film surprised me in more ways than one.

One of the remarkable things about the film is its ability to present the Protestant church with full respect, whilst also being able to poke fun at it.  The silliness of a wealthy community based organised religion is ever present in the film, and it leads to many humorous moments.  Teenage choirs, bible quotes on a cafeteria wall, church gift shops and themed church tours are dorky, incongruous and silly.  Schrader gets a lot of laughs from this, as well as with some sharp and dispassionate writing.  Yet the beliefs of the characters, and the well-meaning nature of the affluent megachurch ‘Abundant Life’ is never ridiculed.  This means there’s a connection with Ernst’s troubles about his faith, because Schrader paints a realistic, balanced world (for the most part).  Ethan Hawke’s terrific performance of course helps this message along, and he is stingingly on point in this role.  The desolation that his character goes through really does go low, by shooting Hawke’s ever moving face in muted lighting.  When interviewing Hawke, BBC Radio’s Simon Mayo said to him: “This is a colour film, but it looks black and white.”  That says it all about the films look, and Hawke’s acting in the film.  It’s very astute, and measured, but still packed with life.  And Schrader’s decision to frame the film in the box shape 1.37 could have compacted the themes down too much, however it focuses our attention and dismisses any unneeded empty space.  I’ve said it many times before – filmmaking is its own art and as a filmmaker you should be designing an experience through what a film can do (TALK TO WILLIAM FRIEDKIN).  Forget normality, and only show what you must.  The 1.37 format is a smart way to achieve this, because it cuts away so much fat.  It doesn’t mean the film is soulless, because Schrader puts enough juice in to give it a kick.  Juice like sudden splashes of extreme and original gore.  When was the last time you saw a reverend wrap barbed wire around himself before putting his robes back on?  It’s an excruciating image, and it honestly left me aghast.

This film probably has the most bizarre scene of the year.  It comes towards the final act, where the film takes a turn with the Toller character.  He’s almost given up on life, at least this life, and his heavy drinking has got even heavier.  During a bit of a binge, Mary comes to his door unannounced, having felt a sudden fear in the night.  She can’t explain why she feels so terrible and recalls a strange activity her and husband would do to Toller.  It involved smoking a joint, then laying with each other and guiding each other’s movements without saying a word.  Toller asks if Mary would like to do this with him, she’s hesitant, but says yes.  She lies down on the wooden floor, and Toller lays on top of her.  Their faces are millimeters apart and they are breathing at each other, holding their arms together.  They could kiss at any second, but instead the scene transitions to them seemingly flying – gliding over scenes of man’s destruction of the planet.  It is a peculiar moment in the film, where Schrader switches from the subtle to the obvious, and so it was quite bemusing.  Nonetheless I’m a fan of when a movie takes a fantastical jump, for example 500 Days of Summer (2009) is futile apart from the singing and dancing scene, and La La Land’s (2016) best sequence is when they fly off in the planetarium.  So I went with Schrader’s dream, following Toller’s journey from faithless to faithful, thanks to a unique connection with Mary.  Before this scene their relationship is gentle, and tactile, then after this scene they are completely comfortable with one another.  It’s a mixture of a father daughter dynamic and a couple who have been married for sixty years dynamic.  The father daughter thing gets thrown out the window in the final seconds of the film, but even as they are aggressively kissing, there is something sweet, and innocent about it.  And of course, her name being Mary has a meaning, and I’m sure someone out there will make a video essay charting how Schrader has hidden every story of the bible in the runtime.  I need to see the film again before making any clear judgments.

The end of the film is sublime, and Schrader leaves just enough blank space there.  It tops of an enthralling experience and leaves little interpretation in my eyes.  I believe that Toller dies in that moment, from the pressure of Mary pressing the barbed wire into him, or along those lines anyway.  The screen cutting to black is my explanation, but more than that Toller’s journey seems complete.  I grew such an affection with his troubles, and motives, that I was willing for him to die, because that’s what he would have wanted.  Mary is naturally his saviour, and puts a halt to his martyrdom, and the death of innocents.  However he is still successful in his mission to pray again, and in reigniting his love for his religion and his fellow man.  In a scene prior to the end, Toller is pleading Mary not to come to the church service where he plans to do his suicide bombing.  He tells her of his Grandfather’s death, a holy man himself, who died ‘somewhere between the first and second floor’ (I’M IN LOVE WITH THAT LINE) of an old bank elevator.  As he died of a heart attack, he told the boys helping him that ‘he was on holy ground’ before taking his final breath.  It’s a touching piece of dialogue, where Toller appears resolute and content with his fate.  And when he is kissing Mary, perhaps he is on holy ground too, in his mind, and that is very satisfying indeed.  First Reformed is a bleak picture at times, but SO full of hope and wonder.

Thanks for reading this.  I can’t wait to see the film again, and read about it, and understand it more.  These are just some initial thoughts about a movie with issues beyond my understanding.