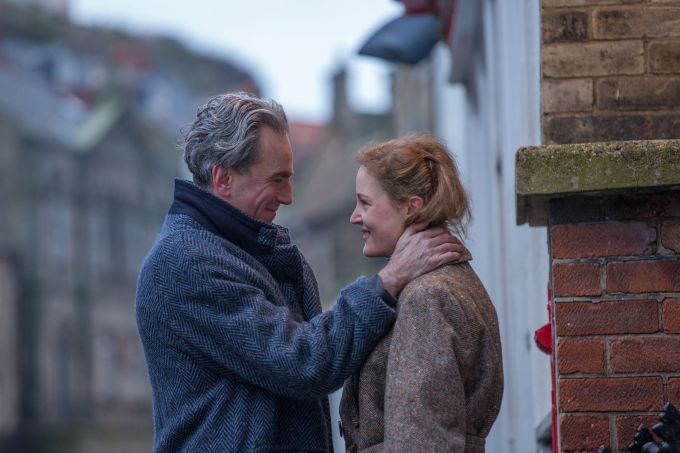 This film is so perfect that I cannot review it.  It’s not possible for me, and like with last year’s Dunkirk, Blade Runner 2049 and Call Me by Your Name there’s a sense that’ll I’ll ruin the experience if I review it.  There’s more to the film then just if it’s good or not, if you should go see it or not.  You should definitely go and see it, even if it’s not the usual sort of film you’d go and see.  It’s worth every penny of your cinema ticket, trust me.  Paul Thomas Anderson is a genius auteur, and with Phantom Thread he’s hit it out of the park again.  The film is doing so many things that it’s really hard to comprehend it all.  It’s a dream-like parable, a character study on a creative obsessive, a romance, a ghost story, an abstract comedy and most of all a film about health and eating.

My own obsession of nutrition and dieting stems from the Joe Rogan Experience.  This terrific podcast, hosted by comedian and UFC colour commentator Joe Rogan, often has health experts on as guests.  They come on to de-bunk myths about food groups, and discuss the better ways to fuel your life.  Rogan himself is a fitness fanatic, who mostly keeps a strict Ketogenic diet and has a constant exercise routine.  The Ketogenic diet is very popular right now, and consists of a low carb high fat intake, which leads the body to naturally burn energy.  Many, including Rogan, proclaim it has improved their life drastically.  They feel less tired, less anxious and sleep better – not to mention being much fitter.  And that’s what a lot of people don’t realise about what they are eating, and how much it affects them.  It may seem silly, but if you’re particularly down, you should try and change your diet for the better because it is massively important.  The changes you make should be the correct ones though, and not the ones cycled out falsely for years.  Sugar is the worst, and saturated fat isn’t all that terrible.  The food pyramid taught in schools has in some way ruined the lives of many people who believe the wrong thing about what’s good to eat.  It’s outstanding the amount of people slowly poisoning themselves by eating loads of bread and pasta – foods our bodies just aren’t built for digesting.  The point is that what we put in our bodies has a huge affect on us, and Phantom Thread features a lot of eating – something that I think is significant in the film… 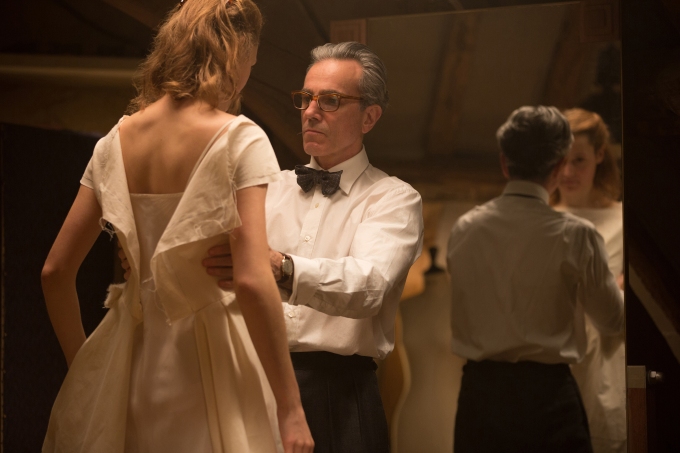 Some of the film’s most amusing scenes occur around the breakfast table.  Woodcock’s day is ruined if he is unsettled whilst having his breakfast.  This means no confrontation, no loud buttering of toast or any form of interruption as he works.  He requires his mind to be totally on his work, and is uninterested by anything else whilst he does it.  Breakfast being the most important meal of the day is a fallacy really, but for Woodcock it is crucial.  He needs a clear mind, and doesn’t have the time for the worries of the women in his life.  This is because his dressmaking is everything, and to battle his anxiety and grief over his mother he designs constantly. He can’t tackle it any other way.  Eating can be a cure for anxiety, and often if you feel anxious, you probably just have an empty stomach.  Anderson uses breakfast, and Woodcock’s attitude towards it to show how geared he is to always be creating.  It also highlights his distain and boredom for almost anything else.  The scene in the beginning of the film where his current companion is bothering him with an argument shows how no-one comes close to his mother, or his work.  When Alma comes into his life, she too is annoying at breakfast.  Yet there is a bite to Alma, and she’s not going to be dominated by Woodcock.

Eating breakfast is usually an inconvenience for Woodcock, and he gets up to do some work first.  It’s not that he just doesn’t have time for confrontation while he draws, and picks at eggs, he doesn’t have time for the luxury of it.  The intensity in his creativity is ever-present during these scenes, and Anderson uses them as a starting point to build this strange character.  It’s the foundations of his extraordinary nature of a loveless, deeply focused man.  There also comes moments of humour from these scenes, where Alma inadvertently strikes back at Woodcock by being more annoying.  Being irritated by people’s weird little habits is a human thing, and so in a minute way we sympathise with Woodcock.  Only till we realise that all he needs is a bit of time to relax.

Every now and then Woodcock indulges to a great degree, and for particular reasons.  It comes when the anxiety has gone, and he feels brief moments of contentment.  For example early in the film when he meets Alma, and instantly has a connection with her, he is relaxed.  He’s in the country away from his work and he engages with someone who completely captures his attention.  And so he orders this extremely extravagant breakfast that seems to never end.  It’s interesting because often we indulge when we feel down, or are feeling lazy.  Woodcock indulges when he is on top of the world.  This is because he’s not fighting anything or chasing that desire to re-create the wedding dress he made for his mother.  He’s at ease, and so goes to the extreme when he’s eating.  There’s madness to this, because the meal he orders seems too big for anyone to eat.  Surely he would feel sick after all that food?  This indicates the dream-like nature of the film, and Anderson’s choice to use motifs to tell a story, rather than reality.

Woodcock only indulges on his own terms, and when Alma attempts to spoil him by evacuating the busy house and cooking him dinner – he’s not amused.  His controlling attitude and his need for everything to be precise come out in this part of the film.  It’s the first indicator of Alma losing faith in him and shows a broken dynamic between them.  There’s hopelessness to her admiration for him, and so it churns a cycle of events that lead her to take more drastic actions to get his full attention. 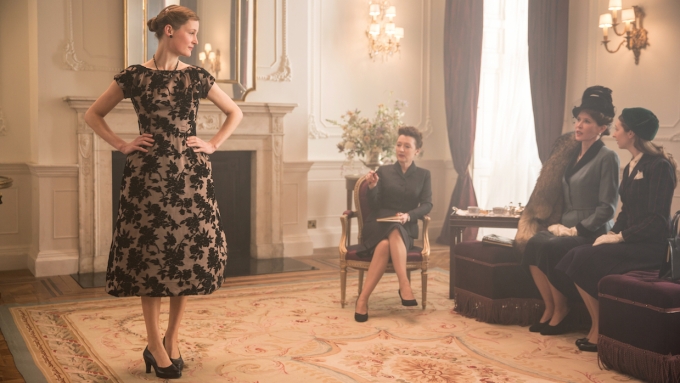 The third act revelation in this film is an interesting one, because it subverts our expectations to some degree.  Woodcock is built as the villain, and the one capable of malice.  Alma’s use of the poisonous mushroom to weaken Woodcock so that he becomes malleable and caring is not a plot twist but advancement in character.  It’s the use of a plot device to have character development instead of a narrative move.  Anderson uses as almost a point of romance, something the film is full of.  The outstanding soundtrack from Jonny Greenwood has lush romantic tones that sweep the film along.  And the relationship between Woodcock and Alma is gentle and loving at times.  The poisoning brings a new level of caring however, and removes the toxicity between them.  Woodcock’s health on the demise shadows thoughts about the care-system in general.  It’s the kind of thing where injured soldiers fall in love with their nurses.  Suddenly Alma is all he needs to survive.

Without our full health we become different people, and unable to fulfil our potential.  Woodcock’s revelation and subsequent submission indicates a massive change in his character.  Suddenly he is content, and changes his life to revolve around Alma, instead of the work.  This is because he has finally finished grieving for his mother and can move on.  He doesn’t have to seek perfection in his dresses, searching for the stitch that will bring the feeling of his mother back.  The right stitch has come in the form of this unbalanced and physically unhealthy relationship with Alma.  It’s a strange connection they have, but no doubt one full of actual love.

This is a remarkable film.  It could be Anderson’s most accessible at the surface level, but still with a thick subtext.  Daniel Day-Lewis’ Woodcock is assured, though soft and idiosyncratic against Vicky Krieps’ insecure but charismatic Alma.  Their binding together is shown as a to and fro as they eat and live together.  Woodcock’s sister (Lesley Manville) intervenes, appearing to be the master of her own health and not the one bit unstable.  The instability creates the drama and the teetering edge that the film sits on.  At any moment the film could explode with anguish and take you away as the viewer.  In the end consumption and production drive the film, taking plenty of turns as it goes.  When something goes in, a change must occur, and I think Anderson stunningly shows that here.  There’s a mirror to the way the characters engulf and the way they act.  It works on every level, which creates a nuanced and utterly captivating experience.  There are layers, and what I’ve discussed is only one of them.  I cannot wait to see it again.