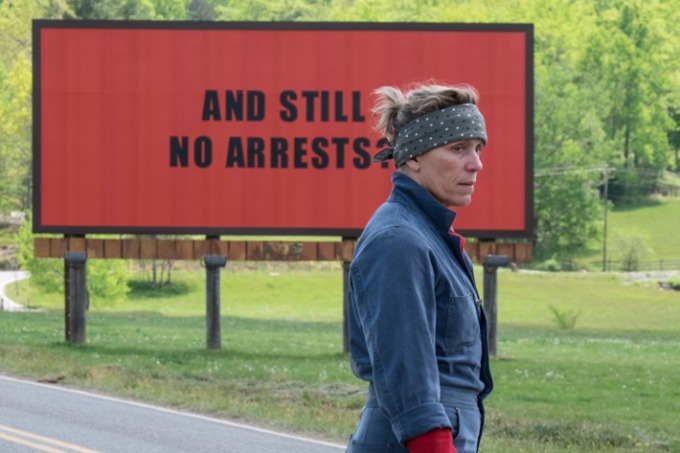 In Bruges is one of my favourite movies of all time, and unlike a lot of people I really liked Seven Psychopaths, so I was looking forwards to Martin Mcdonagh’s new project.  With this film he has the backdrop of small town America, where middle-aged mother Mildred (Frances McDormand) reminds the local police about the murder of her daughter by renting out Billboards just outside of town.  The signs are provocative and question the police on why there haven’t been any arrests in seven months.  From here she engages in a conflict with the police department, and of course herself.

There are a couple of things to get out of the way before I discuss the major problems this film has.  First of all, I found no problem in the films attitudes towards race and McDonagh does well at creating a dark character from this.  Second of all, if you take this film for what it is, then it is absolutely fine.  It is a decently structured movie that has some laugh out loud moments, and a few nice pieces of direction.  The problems come from that structure however, and the way the story is told.  Right from the very beginning the film is humorous – almost to a point where certain scenes are set up like full – on comedies (talking sitcom level).  This means that when particular scenes are meant to me more dramatic, audience’s chuckle because they are in the comedy mind-set.  In nearly every scene of the first half of the film it is played for laughs, so the second more interesting half loses a lot of its weight.  Consequently there was a distance from myself and the narrative because of how comic the situations and characters were.

Frances McDormand as the central character does a good job, but because of the themes of the film her character wasn’t totally likeable.  This is kind of the point though, about how crippling regret and grief can be so McDormand handles it all well.  Sam Rockwell is terrific as ridiculous cop Dixon in the second half of the film, and just sort of funny in the first.  It has an incredible supporting cast behind them, including a cute Woody Harrelson performance, though the choice to cast a younger woman from Australia as his wife didn’t make much sense?  Peter Dinklage is under-utilised (considering he’s in the top 1% of dramatic actors) and his stature is overplayed.  Overall the great cast keep the film watchable, but mostly their characters were cartoonish.

This is the first review of the year that I’m struggling to keep under 500 words so maybe I’ll write something else about it.  I would describe it as a good film, but nowhere near as good as the praise it has been receiving.  There were so many little moments that felt out of place in a grounded film about loss?  I would like to ask McDonagh if he meant for it to be a sub-realistic parable, rather than a black drama slash comedy.  Perhaps that would make the film work a bit better.

Yes.  (Just close your eyes and put your fingers in your ears when the deer arrives).

One thought on “Three Billboards Outside Ebbing, Missouri – Film Review”